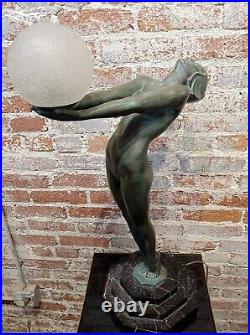 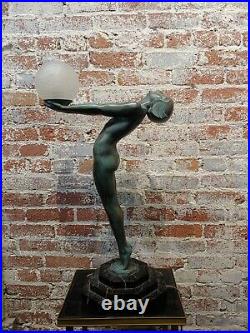 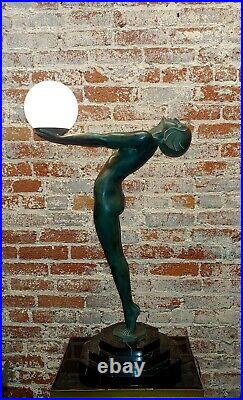 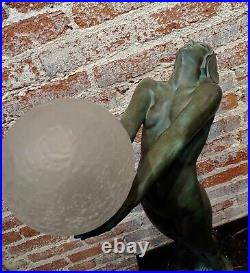 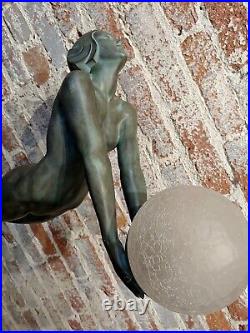 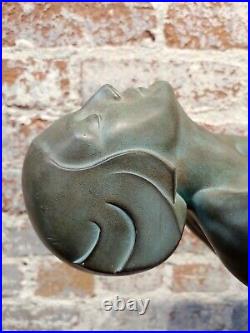 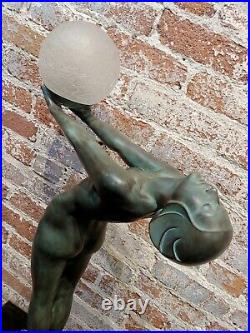 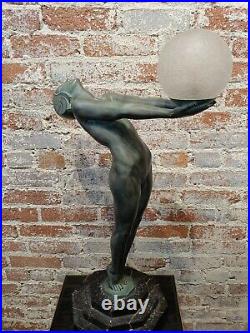 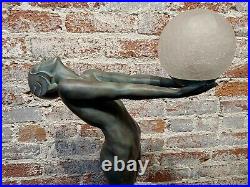 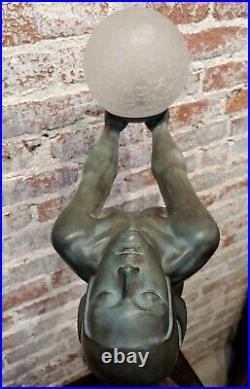 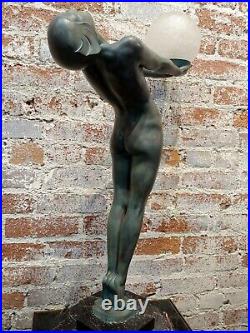 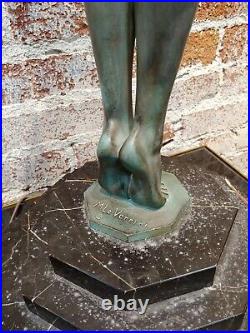 Width: 18.50 (47 cm). Art Deco, which is widely considered to be an eclectic form of elegant and stylish modernism, was influenced by a variety of sources - among them were the so-called "primitive" arts of Africa; as well as historical styles such as Greco-Roman Classicism; and the art of Babylon, Assyria, and Ancient Egypt- updated by aerodynamic designs. At that time, the women's liberation movement was making significant progress.

Bobbed hair and short skirts (to dance the lively Charleston) characterized the iconic figure of the "flapper" called garçonne in French, meaning "boy" with a feminine suffix. This new "in motion", slim and slender, shortly dressed, female silhouette, was an important source of inspiration for Max Le Verrier when he created his collection of dancers, gymnasts, and Art Deco lamps.

He continued to work on this theme and also one concerning animals, using a precise linear fluidity and simple shapes. The captivating beauty of his creations, not only can be judged by the extreme detail of the hands and faces sculpted, but also by the elegance and charm of the poses of his sculptures.

Louis Octave Maxime Le Verrier was born in Neuilly sur Seine on January 29, 1891. His mother was Belgian, and his father was a Parisian goldsmith and jeweler on Boulevard Malesherbes in Paris. His parents divorced when he was 7 years old. He attended several boarding schools including Collège de Verneuil sur Avre and was a brilliant student. His interest in drawing and sculpture occurred early, and he practiced his craft on wooden rulers, which he turned into little houses, churches, and other small items. His father thought that his future should be in farming; therefore he sent his son to St. Sever and La Reole to study agriculture against Max's wishes. However, Max Le Verrier kept alive his liking for sculpture during his spare time. This period was an aviation era, which fascinated many youth of that time. He met a Frenchman named Jameson, who bought a plane on credit, and, together, they opened an aviation school in Rendon. Jameson gave his part to a rich, well-off Englishman named George Lee Temple, and Le Verrier stayed and perfected the aircrafts and engines. Illegally, he practiced flying on Bleriot and then on Breguet, making some successful flights; he received his pilot's license in 1913. Max Le Verrier registered in France for his military service after being granted an extension of one year. He was assigned to the Cherbourg fortress artillery. He applied for admission to the aircraft unit several times. At the beginning of the war, there were few civilian pilots. Le Verrier was sent to Pau, where he received his military pilot's license. Then, as part of a bombing squadron, he was sent to the front lines of Voisin in February of 1915.

On May 25th of 1915, he was shot down by two German fighter planes during an air battle. His plane was riddled with bullets, and his engineer was killed behind him. Fortunately, Le Verrier was not hurt but managed to land behind enemy lines and was classified as "missing in action". Posthumously, he received the Military Medal and Croix de Guerre 14-18.

Max Le Verrier was sent to a prisoner of war camp in Munster, in the German region of Westphalia, where he stayed three years. As he was a pilot and non-commissioned officer, he was not forced to work; he asked for tools and modeling clay and with seriousness began sculpting. He portrayed mates, and created a statuette of a Russian.

From time to time, the professional and amateur artists of the camp held an art exhibition, and he made friends with other artists in the camp, such as Bardin, a wood carver. In the beginning of 1917, Le Verrier, as part of a prisoner trade, was designated to go to an interment camp in Switzerland. From that time forward, he devoted his life to sculpture.

He rented an artist atelier "Rue du Théâtre", where he worked 12 hours per day. He made some terra cotta pieces, and in a 1920s hacked-effect style, he carved his first sculpture, the now-famous Pelican.

This sculpture, signed ARTUS (Max Le Verrier's pseudonym), had great success and was the beginning-piece of his workshop, created in 1919. He executed all processes of his sculpture from the initial phase, to chiseling, patina and marketing. In 1921, he married Jeanne Hubrecht.

The following year, his first son, Jean Paul, was born and his second son was born in 1930. Then, he created a collection of animals inspired by zoos and circuses including Jardin des Plantes and Bouglione Circus in the Jardin d'Acclimatation. He sculpted a large stork; a squirrel, in a cubist trend; as well as panthers, chimpanzees, horses and lions, sometimes together with famous animal keepers such as Pompon with the White Bear exhibited in the 1922 "Salon d'Automne". He also sculpted many statuettes, male figures and dancers. For him and for the era, it was a golden age. In 1928, he carved from a live model, his famous Clarte, the woman with a lighted ball, the main piece of art of his collection. For this work, he needed three different models: one for the head, another for the chest, and one for the legs. For this last part, he asked an African-American woman playing in Josephine Baker's ballets to pose.

The work also included a very 1930's candle stand, taking back the idea of an antique goddess of light, symbolizing the era with a boyish hairstyle but also by the sedateness of her figure, The Clarte was displayed in the exhibition Lumieres or Lights at the Georges Pompidou Center from May to August 1985 and also in the 1987 exhibition "Made in France" at Harrod's department store in London and in the exhibition "De Main de Maitre" at the Grand Palais in Paris. It was also exhibited in the Martinez Hotel in Cannes in 2000.

Today, two of them can be admired at the Lutetia Hotel in Paris. Max Le Verrier also made ceiling lights, wall brackets, lamp bases, and bookends. Eventually his highly successful production studio moved in 1933 to land he bought land in the heart of old Montparnasse, in the 14th district, 30 Rue Deparcieux, in the back of the blind alley, in a green setting. When the Second World War broke out, he had been settled for 8 months. During the Occupation, he continued his sculpting operation. But as a member of the Resistance for which his served as a "mailbox", he was arrested, held captive for four days. Was handed over to the German soldiers and was finally released. He managed to run away, owing to a hidden door, whose entrance was located on "Rue Daguerre". This door had been built so the people working illegally- Jews or those who were not working for the German Obligatory Labor Service could escape. With a fake identity, he lived at a friend's place in Paris, and managed to go to Gers, a region in the South of France, where he owned a house and where his wife and his two sons were living. In that large house, they would put many people up during the war, giving them the benefit of the farm food, and they would help some war prisoners. He re-started by focused his creation on bronze items such as statuettes, boxes; ashtrays; office items; religious items; and medals inspired by antique or medieval masterpieces, town arms, and by the Loire castles, cathedrals, museums, and private collections. He was assisted by some skilled workers, his foreman, his wife wife and two sons. As a tireless sculptor, he created another animal collection in bronze in a smaller size Birds, Rhinoceros, Donkey, Goat, Bear, Sea Lion, and a characters group titled Don Quichotte and Sancho Panca. Until his last breath, he sculpted and in his hospital bed three days before his death at age 82 on June 6, 1973. He was buried in Fontenay les Bris Cemetery. A beautiful piece that will add to your décor! Please check all the photos. Should you have any inquiries, please do not hesitate to ask a question or call 310 293 2442. The item "Max Le Verrier 1930s Fabulous Art Deco Lamp Nude Female withglass Globe" is in sale since Tuesday, October 13, 2020. This item is in the category "Art\Art Sculptures". The seller is "pasadena_art_monkeys" and is located in Pasadena, California. This item can be shipped worldwide.